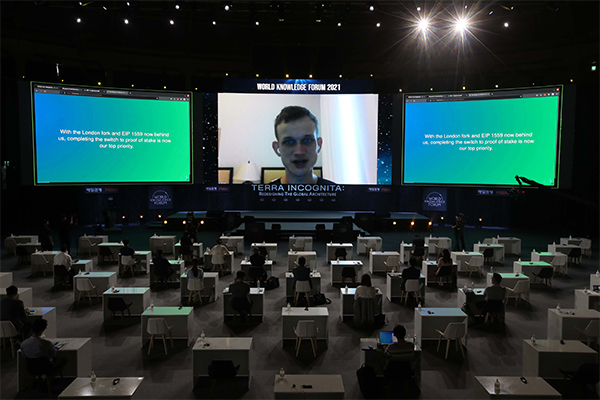 The upgraded Ethereum 2.0 backed by Proof-of-Stake (PoS) “will be coming soon” in secure, user-friendly and scalable blockchain, ready for employment in finance, enterprise and non-fungible tokens (NFT), said co-founder Vitalik Buterin of one of the world’s widely used blockchain protocols.

“The PoS beacon chain has already been running successfully for more than nine months. So over the next, maybe six months or a little bit less or a little bit more, it’s time to fully retire PoW and let the PoS beacon chain run the entire Ethereum ecosystem,” said Buterin at the 22nd World Knowledge Forum that kicked off on Tuesday in Seoul. Last month, Ethereum activated London hard fork, a major change consisting of five Ethereum Improvement Proposals (EIPs) including EIP 1559 to double the block size so that gas fees can stay stable. Through the largest protocol changes, Ethereum goes to an upgraded, overhauled system Ethereum 2.0 that would have PoS mechanism, in which cryptocurrency miners can mine or validate block transactions based on the amount of coins they hold, from current proof-of-work (PoW) mining system that requires a lot of energy with miners receiving tokens as rewards for their computers’ solving of complicated algorithmic puzzles. Users will barely notice the transition as the Ethereum chain will be embedded inside beacon chain blocks. Existing applications do not need to do anything around the merge, he said, adding that “Everything after the merge will work very similar to how it works before the change.” 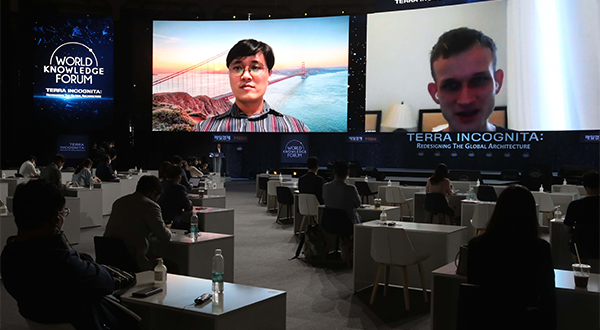 [Photo by Han Joo-hyung]
Buterin noted that the algorithm merge will solve Ethereum’s energy efficiency problems by reducing the energy use by around 99.9 percent. Through this, it will be able to get free from criticism that cryptocurrencies consume a huge amount of electricity on concerns about its massive carbon footprint.
The issuance rate will reduce, while the security against attacks will increase. PoS is not the only thing Ethereum is working on. PoS solves Ethereum’s energy efficiency problems and makes the system more secure, but there are also other important problems in Ethereum that it needs to solve and is solving, which is “scaling,” according to Buterin. He said the success of NFT shows Ethereum has “great value beyond finance” and thus, the financial applications need to lower the transaction fees to and for non-rich people, everyday regular users and those outside the wealthy countries. Ethereum has already started scaling, he said, explaining “sharding,” the process of splitting a database horizontally to spread the road and reduce network congestion to improve its scalability and capacity. To wrap up the presentation, Buterin emphasized that none of these proof-of-stake or scaling ideas are just theory. They are already having at least a test implementation and they are coming soon, he added.