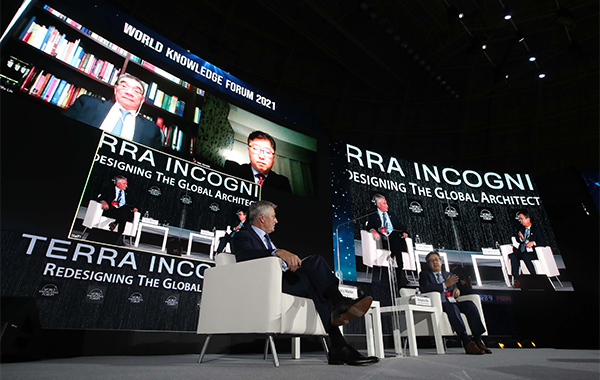 Inflation hovering at 5 percent level could turn the United States softer on restrictions on Chinese imports next year, a top Chinese economist forecast on Wednesday.

“The situation (U.S. restrictions on China may continue” amid the rivalry between China and U.S. in trade, according to Justin Yifu Lin, professor of National School of Development at Peking University, during a virtual session on “Global Economic Outlook 2022” at World Knowledge Forum in Seoul. But the conflict could be moderated next year due to the boiling “inflation rate in the U.S.” The economist claimed that there might be no other country than China to offer goods at cheaper prices. Lin discussed post-pandemic global economic order with two leading economists from Seoul and Tokyo – Korea Development Institute (KDI) School of Public Policy and Management Professor Cho Dong-chul and University of Tokyo Professor Sawada Yasuyuki. Lin was senior vice president and chief economist of the World Bank in 2008-2012 and is councilor of the State Council and member of the Standing Committee of Chinese People’s Political Consultation Conference. Although uncertainties surrounding Covid-19 remain will persist, the global economy will fare better next year, they agreed. Cho projected global economy to expand 6 percent this year from last year and about 5 percent next year. “Economic growth rate will slow down in terms of numbers because we’re not going to have a base effect, but I think next year’s economic growth rate will be higher than the pre-pandemic normal growth rate,” the professor said. Others echoed his view, with Yasuyuki noting that the outlook under Asia Development Bank’s growth forecast for the vast economy will be “positive.” 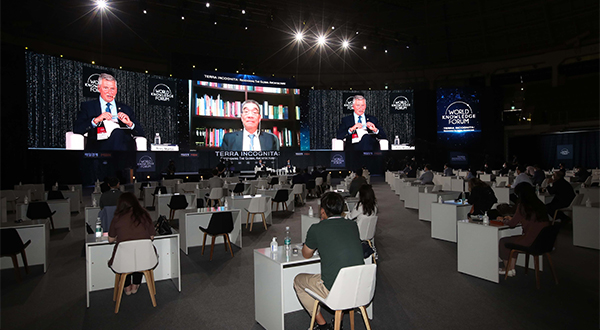 [Photo by Han Joo-hyung]
Lin expected China’s GDP to grow about 8 percent this year and 6 percent next year, far above International Monetary Fund’s growth projection of 4.9 percent for global economy next year after 6 percent this year.
The top economists expected the impact of the ongoing pandemic will be “far smaller especially for those countries fully vaccinated,” Cho said, “mostly advanced countries.” “Developing countries will have difficulty in overcoming the pandemic next year,” he said. Policy is also going to be important part of the economy next year, with the U.S. Congress talking about their second round largest-scale stimulus package. The package will likely have a spillover effect to other countries, Cho noted. Digital, technology-related non-face-to-face industries, and e-commerce industries will remain strong while entertainment and tourism sectors will likely rebound from pandemic fallouts.