[Photo by Han Joo-hyung]
Calling South Korea a “scientific and technological force,” former U.S. Secretary of State Mike Pompeo praised Korea’s “prudent and multifaceted response” to the Covid-19 pandemic while sharing insights to the changing global order at the 22nd World Knowledge Forum that kicked off on Tuesday in Seoul.
“We must use history as the means to map our planet’s future, but in doing so we must ingrain humility, for the future is never known and is most frequently predicted in error,” he said while stressing the necessity of preserving world order “in a manner that reflects inescapable change.” ​
The virus spread has “ruptured” the world order, and in order to avoid similar pandemics in the future, the World Health Organization (WHO) needs to be “reformed and depoliticized,” he said. “Doctors, scientists and administrators must show allegiance to their mission and not to any government.”
As Korea has excelled tremendously in the information age, he said “the world has watched in awe” for Korea to become a powerhouse in a new technological age in which a Fourth Industrial Revolution will occur. But he also warned about risks that the world is facing when the largest technology companies that “wield power that is greater than most nations.” He said their undue influence should be “curtailed under applicable national laws and conventions” to prevent these companies from posing a threat to democracy. 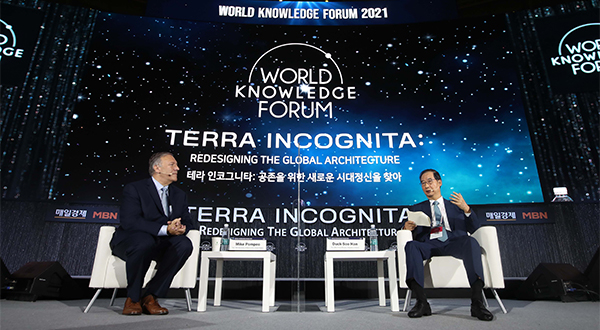 [Photo by Han Joo-hyung]
With regard to North Korea, the former Central Intelligence Agency (CIA) director said there will be “no certainties, only probabilities” to assume the intentions of the regime. To deal with North Korea’s mass destructive and nuclear weapon issues, it is important to “deal with the source of a problem directly,” he said, adding “Peace is always made with our adversaries, for there is no need to make peace with allies or friends.”
He also expressed his desire that the Korean Peninsula could achieve harmony. “If reunification is ever to come, it must come from the will of the entirety of the Korean people, never through any conflict, particularly one that could involve weapons of mass destruction,” he said. The fall of Kabul and the destruction of the Afghan army are “assaults on the international system.” Calling for international action, he said “Afghanistan must not become a haven for terrorists, neither can it be ignored.” As we expect the urban population to increase sharply by the end of this century, he said nuclear energy is “mandatory” to meet the needs of such large populations. He said renewable energy can only be supplementary because of the intermittent production.