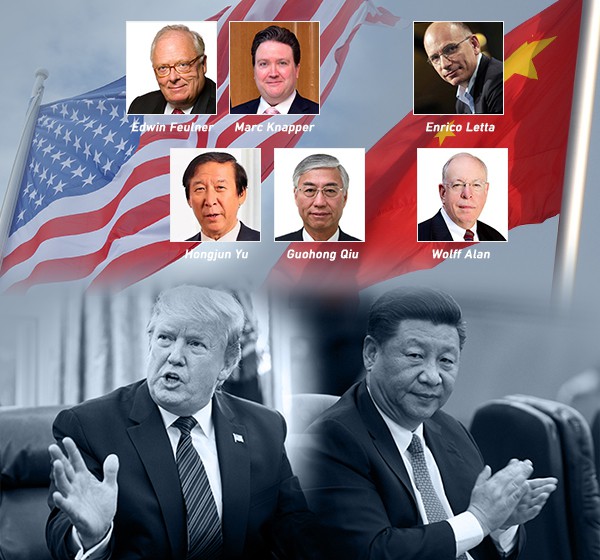 U.S. and Chinese diplomacy experts are to hold heated discussions on the intensifying power struggle between the two hegemons in the first global-scale forum to be held in Seoul since the coronavirus outbreak.

U.S.-China rivalry would be one of the key themes at the 21st World Knowledge Forum, an annual event hosted by Maekyung Media Group to be held on Sept. 16-18 at Jangchung Arena and Shilla Hotel in central Seoul. Hongjun Yu, a former Chinese diplomat, would be speaking in the session "Post-COVID-19 International Order” to share his insight on U.S.-China power dynamics. Yu served as the Vice Minister of International Department of the CPC Central Committee, President of China Centre for Contemporary World Studies (CCCWS) and Member of Foreign Affairs Committee of the CPPCC National Committee. He is currently Adjunct Professor at Renmin University of China and International College of Defence Studies, NDU, PLA, China and Vice President of Chinese People’s Association for Peace and Disarmament (CPAPD).

Joining Yu from China would be Guohong Qiu, who served as Chinese ambassador to South Korea for about six years from 2014. Qiu is widely regarded as an expert on Northeast Asia, having spent over 30 years in senior diplomatic posts across China, Japan and South Korea. He was the longest-serving Chinese ambassador in Korea since the two countries normalized diplomatic relations in 1992. He also has over 15 years of experience working for the Chinese Embassy in Japan.

U.S. speakers include Edwin Feulner, co-founder and former president of the American think tank The Heritage Foundation, and Marc Knapper, U.S. State Department Deputy Assistant Secretary for Korea and Japan Bureau of East Asian and Pacific Affairs. Feulner is considered one of the architects behind the diplomatic policies of the Trump administration. The Heritage Foundation is one of America’s leading conservative think tanks that have played a major role in the policymaking of past Republican presidents. He is expected to share his thoughts on the direction of U.S. diplomatic policy after the U.S. presidential elections in November, as well as his views on South Korea’s alliance with the U.S. and its role in dealing with North Korea. Knapper will share his insights on Northeast Asia policies in the Trump administration. He has held multiple postings in Tokyo and Seoul, giving him unique knowledge into the relations between Korea and Japan.

A special session on the “U.S.-China Trade Conflict and Global Trade Governance” would gather trade experts from around the world, including Enrico Letta, former prime minister of Italy; Alan Wolff, deputy director-general of the World Trade Organization; and Jeffrey Schott, senior fellow at the U.S. Peterson Institute for International Economics.

The session will discuss the implications of the escalating U.S-China trade war on the global economy and the accelerated decoupling between the two economies following the coronavirus pandemic.

By Yoo Joo-yeon and Kim Hyo-jin