South Korean and Chinese economies have passed the worst after suffering contraction in the first half as they had coped relatively faster to virus outbreak, but their path beyond 2020 would be different as China still has ample resources available to run at pre-crisis level while Korea’s growth would stay below potential rate due to regulatory load and demographic challenges, experts warned.

Justin Yifu Lin, professor of Peking University and one of China’s best-known economists, projected an annualized growth of 3 percent this year for China, which would be the worst since the socialist economy implemented opening and reforms in 1978. The No. 2 economy would then pick up 8 to 10 percent next year, maintaining comfortable lead over the global economy and continue to “drive” the economy with an average 30 percent contribution to the global GDP, he said. Given the ample fiscal and monetary ammunitions, Beijing authorities have the means to push growth at more than 10 percent in the second half to meet its annual target of 5.3 percent this year. Although possible, “that would be not desirable,” Lin said as he joined the World Knowledge Forum conference in Seoul on the global economy and outlook amid pandemic virtually from Beijing. “Unless all the country control the pandemic, we cannot call victory over pandemic,” and Beijing should “reserve policy space for the future,” he said. For next year, he cited conflict with the U.S. e a bigger downside risk than the pandemic, although it won’t be fully combated next year. Cho Dong-chul, professor on the School of Public Policy and Management under state-run Korea Development Institute who until April had been a member of the Bank of Korea monetary policy board, was less sanguine about his own country’s economy.

He agreed the world economy as well as Korea’s has passed the worst from the pandemic in the second quarter as “the damages from second and third wave” would have lesser economic impact as the world has become better adaptive with the virus. 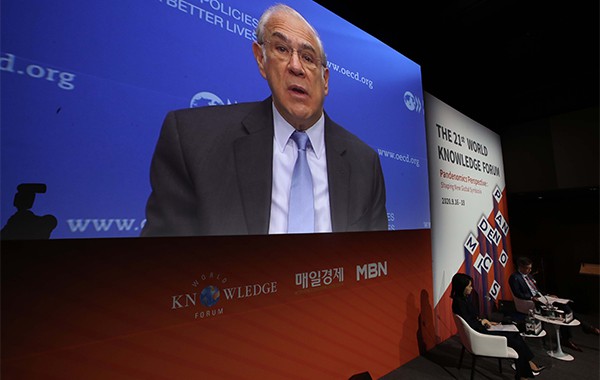 Although the situation won’t recover until vaccine or effective cure arrives, the Korean economy would likely slowly recover from the recession in the first half. But its rebound won’t be as big as in the aftermath of contractions in the past as Korea has become less agile and been losing much of dynamism due to “overload” of regulations and thinning working population.

Cho projected Korea’s economy to run at 2 percent, below its growth potential, over the next five years. The former member of the BOK monetary board expected the central bank to keep loose policy until it is confident the economy is back on “solid track”, and less likely to move to preemptively address risks from asset bubbles. Organization for Economic Cooperation and Development Secretary-General Angel Gurria in pre-taped message called for stronger international cooperation to help end the COVID-19, speed the recovery and prevent future crises. Despite the trillions of dollars spent by the governments to fight and stimulate their economies to cause a high burden of public debt, “we should be careful not to withdraw the emergency measures too quickly. As we address these challenges we need to start thinking and planning what will be what I would quote the new economic normal,” he said.

File
List
PREV WKF: Lack of Leadership Poses Greater Danger to The World Than Virus: Jack Ma
NEXT WKF: Businesses Must Ride Out the Pandemic On Cloud: Vogels of Amazon